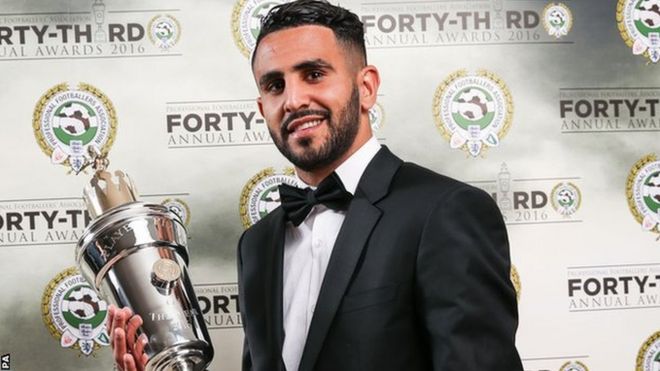 The former Le Havre player joined Leicester City for a we-can’t-believe-our-luck fee of £400,000 in 2014, together with French man N’golo Kante and England forward Jamie Vardy propelled The Foxes to an unexpected EPL title last May despite riding on the odds of 5000-1. Mahrez scored 17 goals and provided 11 assists during the fairy tale campaign. END_OF_DOCUMENT_TOKEN_TO_BE_REPLACED

The player who is still playing football at club level seems not to be happy with the move by FIFA.

FIFA set up the Task Force against Racism back in 2013, but wound it up on Sunday. FIFA said the body had achieved the mission of being set-up. The general secretary Fatma Samba Diouf Samoura said: “It had a specific mandate, which it has fully fulfilled.”

Many opposed the decision. President of the Jordan Football Association and former FIFA presidential candidate, Prince Ali bin al-Hussein was one. He said: “For it to be disbanded with FIFA considering its work done is extremely worrying. The notion the current FIFA leadership believe the task force’s recommendations have been implemented is shameful.”

Toure was a consultant for the task force. Making reference to the World Cup in 2018 in Russia, Toure said there have been instances of racist abuse. On his personal website, Toure said: “When I received the letter telling me the FIFA task force was to be discontinued, I was very disappointed. The letter listed the good work that had been carried out as a result of the task force’s advice and recommendations. So my question is, after failing to deal with racism sufficiently for decades – Why stop when something is beginning to work? Are FIFA being complacent ahead of a World Cup in Russia? This makes no sense,” said Toure. END_OF_DOCUMENT_TOKEN_TO_BE_REPLACED Reports in China have confirmed that Yaya Toure’s agents have met with representatives of the Chinese clubs and that there are concrete offers that have been made. They have stated that it is not a problem for buying Toure out of his contract since he will be receiving a hefty signing on fee that will cover such expenses. END_OF_DOCUMENT_TOKEN_TO_BE_REPLACED The 1-0 win allows Manchester City to progress for the first time in their history to the semi-finals. Pellegrini will certainly want to win this trophy before leaving Manchester City in the summer and in most likelihood it would also be the last tournament that Yaya Toure will compete with City. END_OF_DOCUMENT_TOKEN_TO_BE_REPLACED

Yaya Toure is a midfielder of repute, there is no wonder that this player of Manchester City will be targeted by other clubs. As the transfer window opens up and several clubs place claims on players for their teams, the latest to join the bandwagon for Yaya is Juventus. These reports have come in through Italy sources. At the Etihad stadium this star player of Manchester City is unsure of whether he will be part of Pep Guardiola and his plans.

If you look back at Yaya’s transfer history, he came back to Manchester City in 2010. At that time he was reputed as the star player of Ivory Coast. At that time 24 million Euros were no small fee for him. Nou Camp was considered no longer fit for Yaya and Guardiola, then the boss of Barcelona team, decided to let him go.

The five seasons and more that Toure has played at the Etihad stadium have been successful for him. However, even though he has been termed African Footballer of the Year four times consecutively, this year he is a runner up to Pierre-Emerick Aubameyang. As per Toure’s agent, the midfielder was not looking for a transfer this year. While Guardiola coming in might indicates Yaya’s move, there are others who want him. Roberto, a former City boss who is with Inter Milan, would be glad to have him. He is also being considered for the Chinese Super League. END_OF_DOCUMENT_TOKEN_TO_BE_REPLACED

Ivory Coast will have the services of Yaya Toure pretty soon.  The veteran playmaker has decided to make his way back to international soccer.

Toure had last appeared for Ivory Coast in this year’s AFCON where he had led the team in a successful campaign.  After that, he had said he wanted to be away from national duty for some time.  There were reports from his close sources that he was considering retirement as well.

But, it seems he has come to the conclusion that he should serve the Elephants for a bit more time and he has made himself available to be picked again.

Speaking in a talk show in England, Toure said, “When we won at the start of the year, it was the perfect time for me to take the break that I needed. I had been playing non-stop at the club level and also, for the country and it does put its effects on you. I had started to feel that. So, I thought a bit of time away would be helpful for the body. However, I am ready to get back into Ivory Coast line up now and excited about it.”

Without Toure, Ivory Coast had not had a great start to their AFCON 2017 qualifying campaign as they had been stopped on a goalless draw by Sierra Leone in their first match in Group I.

However, now with the availability of Toure, they can hope for a better result in the Sudan game which is to be played in March next year.

Sudan is holding the top position in Group I standings at the moment having won the only game that they have played.  Ivory Coast is second, while, Sierra Leone is at the bottom.